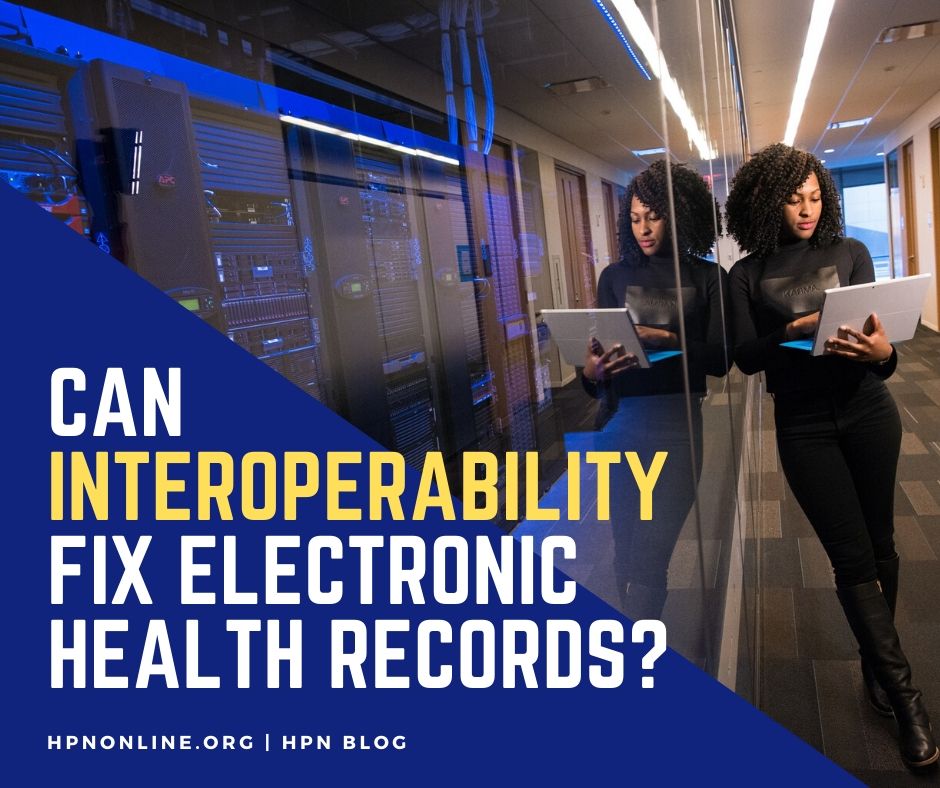 Electronic Health Records providers Epic and Cerner are making headlines in a fight over proposed and pending Office of the National Coordinator for Health Information Technology (ONC) rules designed to promote the interoperability of patient data. At the core of the issue are accusations of "information blocking" by healthcare care providers and the EHR provider Epic—accused of increasing barriers to the use and access of patient data, even by the patients themselves, for their own competitive benefit.

In our last blog, we discussed the latest headlines concerning big data in healthcare; namely, backlash over Google and other tech giants' backdoor access to patient data. Patient data is still making headlines—this time, EHR providers Epic and Cerner are in the spotlight, as the ONC prepares to promulgate rules connected to the 21st Century Cures Act regarding data interoperability—the ability for software and systems to communicate and exchange data between them for use.

This fight over interoperability has major implications for how health professionals and patients interact with patient data—and how the healthcare experience may be coordinated in the near future.

Epic and Cerner take opposite positions on information blocking rules.

On January 22, Epic CEO Judy Faulkner emailed hospital CEOs urging them to speak out against the proposed ONC rule aimed at promoting interoperability, data sharing and patient access to their own health data. "We are concerned that health care costs will rise, that care will suffer and that patients and their family members will lose control of their confidential health information," read Faulkner's email, published by CNBC.

Patient advocates suggest Epic is engaged in information blocking to maintain a competitive advantage. According to Cynthia Fisher, a patient advocate on the U.S. Department of Health and Human Services Health IT Advisory Committee, Epic's position is "a smokescreen to protect their interests." In conversation with Fierce Healthcare, Fisher argued, "Patients need to be in control of their health and their health information and their privacy and should be able to choose who they want to share their information with... The interoperability rule empowers the patient to go anywhere and shop for their care."

Indeed, while compliance with new rules may require initial investments that may raise costs in the short-term, interoperability should help fix communication problems in the healthcare system which endanger patients, and logically facilitate greater competition and even disruptive innovation that would drive down costs.

Epic's major competitor Cerner has vocally responded on the opposite side of the issue, joining with the Carin Alliance—a collaborative of major health insurers, providers, health IT companies and tech giants—to call for the release of the new rules "without further delay."

EHRs aren't living up to their promise.

But others argue this is a mis-characterization, and that Epic is a major perpetrator of information blocking in healthcare. "In Faulkner’s missive to health leaders, she misleadingly claims that patients have been able to download copies of their records since 2010," write Kenneth Mandl and Isaac Kohane of Harvard University in an STAT opinion piece. "In fact, that was not possible at scale until about a year and a half ago."

Critics also claim that information blocking in healthcare is not just about technically being able to access a patient's record but also about the barriers that exist—that even where it's possible for patients to access their own data, it is still too difficult, and those barriers need to come down.

Electronic health records are far from faultless. "The system is an unholy mess," reads the subtitle of a Kaiser Health News Article from last March connecting EHRs to an epidemic physician burnout, inefficiency, upcoding, and even patient safety issues:

"A months-long joint investigation by KHN and Fortune has found that instead of streamlining medicine, the government’s EHR initiative has created a host of largely unacknowledged patient safety risks. Our investigation found that alarming reports of patient deaths, serious injuries and near misses — thousands of them — tied to software glitches, user errors or other flaws have piled up, largely unseen, in various government-funded and private repositories."

When federal programs subsidized the adoption of EHRs, many anticipated that these platforms would improve care coordination between providers and lead to quality innovations. "But it doesn't really work like that," write Mandl and Kohane for STAT. "At the cost of millions to billions of dollars per hospital or health system, health care relies on pre-internet proprietary and non-interoperable software where, as in the old 'Roach Motel' ads, data check in, but they don’t check out."

"Unlike, say, with the global network of ATMs, the proprietary EHR systems made by more than 700 vendors routinely don’t talk to one another, meaning that doctors still resort to transferring medical data via fax and CD-ROM," reads the Kaiser Health News piece. That means after investing $36 billion in federal spending to expand the use of EHRs, "America has little to show for its investment."

Interoperability can prevent information blocking in healthcare... and help EHRs deliver on their promise.

But these interoperability rules can make a difference, say proponents, by establishing an industry standard for data exchange. At their core is a requirement for healthcare providers receiving payments from Medicare or Medicaid to use data infrastructure compatible with "Fast Healthcare Interoperability Resources," or FHIR—pronounced "fire"—a recently developed industry data standard.

FHIR uses standardized application programming interface (API) standards to allow developers to create apps that facilitate "data-level exchange" rather than document-level exchange. In conversation with Health IT Analytics in 2016, Micky Tripathi, CEO of the Massachusetts eHealth Collaborative, explains the difference: "If you just send me some lab results or a list of allergies, that’s great,” said Tripathi. “I need those things, but you haven’t told me the story of the patient, and that’s really important for a clinician to understand.  Document exchange is important, but so is that data-level exchange."

In other words, FHIR's standardized facilitation of "data-level exchange" of information brings us closer to more comprehensive, whole-picture patient care coordination over the internet—rather than the simple sharing of discrete results, as doctors still sometimes do via Fax.

Janet Rae-Dupree of Kaiser Health News drew an excellent analogy for the importance of this FHIR standard in accelerating innovation. "When tech companies can agree to use an industry standard, the adoption of new technology accelerates: Think Bluetooth or USB," she writes. "It's a confusing tangle when that doesn't happen: Think laptop power cords."

The acceleration of innovation in this space may have risks associated with it, especially with regards to data security and patient privacy. Indeed, the enforcement of the FHIR standard may exacerbate causes for concern raised by the backlash against Google's access to patient data we discussed in our last blog.

Those same tech giants—Microsoft, Google, Apple and Amazon—have already prepared their own FHIR-ready applications for both providers and consumers. FHIR could facilitate even quicker innovation and change in this space where we haven't quite decided if HIPAA is working as intended.

But maybe there's an overstatement, here—don't these data security and patient privacy concerns already exist? Will greater innovation necessarily create significantly more risk? And are those risks we need to take in order to reduce the burden of EHRs on clinicians and deliver on the original promise of value to patients?

The argument for letting patients control their own data.

Patient advocate Cynthia Fisher was earlier quoted as saying Epic's concern for patient privacy and data security was a "smokescreen to protect their interests." Mandl and Kohane agree with that assessment. "[Epic] is supporting a meme that patients cannot be trusted to choose their own health apps," they write in their opinion piece in STAT. "Epic has taken the position of the fox arguing that chicken wire is a threat to chickens' freedom to walk around."

Advocates like Fisher, Mandl and Kohane argue that greater patient control of their own health data will help patients to preserve their privacy. "Giving patients control over permission to view their record—as well as over its creation, collation, annotation, modification, dissemination, use, and deletion—is key to ensuring patients' access to their own medical information while protecting their privacy," wrote Mandl and Kohane for the British Medical Journal in 2001.

These advocates envision a future where greater patient control over their own health record will allow patients to fix dangerous clerical errors, contest upcoding—accidental or otherwise—and systemically prevent dangers to patient safety in the current, "broken" EHR landscape.

With patient access and control added to the interoperability picture, the benefits become more clear and intuitive. Interoperability alone can help prevent information blocking in healthcare, but in concert with patient control over their own data, these factors can do a lot to control rising healthcare costs while promoting quality—facilitating innovation, transparency, and even faster, better doctor visits.

What it means for health professions.

Interoperability will facilitate innovation and accelerate change in healthcare—that means change for professions. Preventing information blocking in healthcare and allowing patients to engage with their own health records will fundamentally change the patient experience, and likely change expectations and competencies of professionals engaging with those patients.

There's reason to be optimistic—that improvements will come to EHRs that have been a bane for clinical professionals, and that better data exchange will improve care delivery and quality for both professionals and patients. There's also good reason to stay alert to the rapid rate of change driven by technological innovators—change that could fundamentally alter the way healthcare is delivered.

This is why "Data and its impact on health professions" is the theme of our Spring Conference, April 14-16 in Columbus, Ohio. This is a major trend we want deeper, expert insight on—so we've lined up an outstanding group of speakers with first-hand knowledge of how data is being used to change care, and how professionals and patients will interact with that data in the near future.

While our conference's focus is on practical insight for the health professionals, associations, educators and credentialing bodies that make up our membership, we also can't ignore the larger implications of the discussion surrounding patient records, regulations and information blocking in healthcare.

Learn more about our Spring conference »

Flexibility in the Health Workforce

Our White Paper - How Competencies Can Heal Health Care.